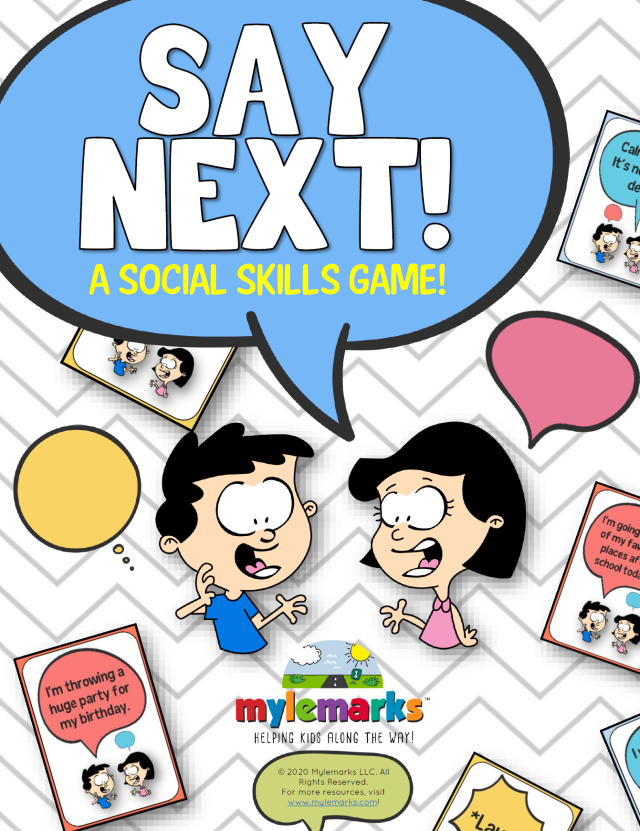 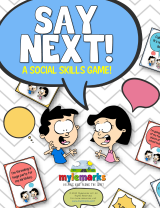 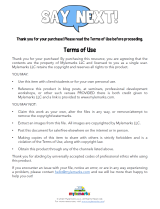 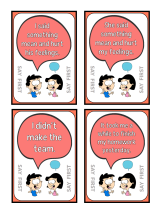 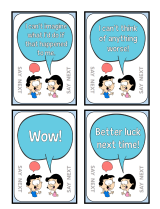 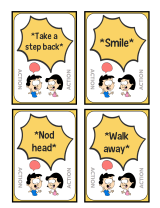 Say Next! is a fun and interactive game designed to teach social skills! Played similarly to Apples to Apples, this game focuses on helping kids and teens develop their conversation skills through play. Say Next! is a PDF download that will be available to you right away. This game is appropriate for both individual work and small groups!

Prior to game play, printing and cutting of the cards is required. For long-lasting results, it is recommended to print on card stock and laminate if possible.

*If you would like the back graphic design on each card, then the card pages should be printed double-sided. It is recommended to conduct a test print to ensure proper formatting and orientation. Cards are designed to be printed as traditional playing cards. Due to differences in printer functions, Mylemarks is unable to provide support if there are printing issues. To print cards without the back design, you can print the card pages Even Pages only, single-sided.

Each player gets dealt 5 of the Say Next cards. The youngest player gets to be the Picker first. The Picker lays down their Say Next cards and draws one card from the Say First pile and turns it over for everyone to see. The Say First card contains a statement that the Picker reads aloud. The other players take a look at the Say Next and/or Action cards in their hands and try to pick a card that they feel might be the best or most appropriate response to the Say First card. Once a card is identified, each player places their card in a pile face down in front of the Picker. The Picker does not participate in identifying a Say Next card. The cards are scrambled by the Picker so that they do not know which cards were submitted by which players.

The Picker rereads the Say First card and then one by one reads each Say Next card aloud or completes the Action in response. The Picker is responsible for identifying which of the cards they feel is the most appropriate response to the Say First card they drew. As they are deciding, they are to talk about why each card might be a good or poor response in conversation. They can also share how they would feel if someone responded to them in that way.

The Picker has to make a decision out of all the Say Next or Action cards given. There might be times when each of the responses would be silly! The Picker can still choose a card, and then share with the group what they feel the best response would be to the statement on the Say First card.

Once a decision is made, the Picker identifies the card they chose and the player that submitted the card gets a point. The card is placed back into the bottom of the deck. Every player that now has four cards in their hands (this should be everyone except the Picker) draws a new card from the Say Next pile. Play continues and the person to the left of the Picker (clockwise) becomes the new Picker. The first player to reach 5 points wins!

Say Next! is designed to provide a fun way for kids to learn more about conversation skills and providing appropriate responses. It is best played with 3 or more players.

Say Next! can also be used as a learning tool for individual sessions or one-on-one engagement with a student or client. Print and cut out the cards. Separate the Say Next/Action cards and Say First cards. Place both piles face down. Flip over a Say First card and read the statement aloud. Draw five Say Next/Action cards and flip them over so that they are visible between you and the client.

Read the Say First card and allow the client to read each Say Next card in response. As they do this, they can also discuss why each card may or may not be an appropriate response. The client can then identify which card they feel might be the best response out of all the choices given. Take the card chosen and place it in the bottom of the deck. Draw another Say Next card and place it next to the others totaling 5 again. Play will continue by drawing another Say First card and working to identify which of the responses work best.

Add to Cart
The resources found on this website are designed to be used to supplement treatment or discussion facilitated by a parent or trained professional.  Mylemark's resources are not a replacement for therapy and are not intended to treat disorders.  They are for educational and exploration purposes only.  Consult with a mental health professional for treatment for mental health symptoms.​
Copyright © 2021 Mylemarks LLC
Terms of Use       Privacy Policy